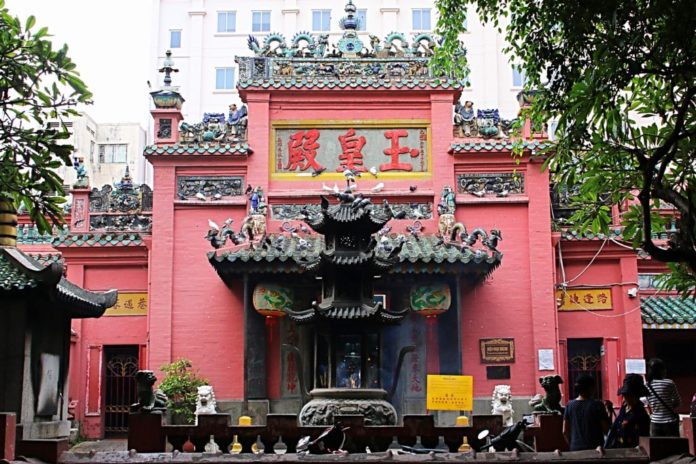 Emperor Jade Pagoda, also known as Tortoise Pagoda, is one of the five most important shrines in Ho Chi Minh City.

Built at the turn of the 20th Century by a community of Cantonese who migrated from Guangzhou province in Southwest China, this pagoda is a fine representation of Mahayanist branch of Buddhism that is practiced widely in Vietnam.

In the main hall, the Emperor Jade Chua Ngoc Hoang or the ‘God of the Heavens’ reigns supreme. Aided by two assistants, the Emperor decides who can enter this higher realm. Those who don’t pass this gate will meet with the formidable ‘God of Hell’, on the left, who will send sinners to one of the 10 levels of hell. Life in purgatory is magnificently if somewhat gruesomely represented by the intricate carvings on the temple wall, depicting different kinds of punishments that await transgressors.

In a different hall, the goddess of fertility Kim Hua, surrounded by figures of women and small children, blesses childless couples who pray for an offspring here. The goddess of mercy Kuan Yin, who forms a very important part of any Taoist temple, has an altar in a room on the top floor.

Emperor Jade Pagoda is a living and working shrine very much in use by the locals who come here to prayer or make votive offerings of flowers, and light candles and joss sticks. With worshippers coming and going, the temple can get busy and feel a little cramped. Its dimly lit, the narrow passageways filled with smoke lend an atmospheric feel to the place, adding to its charm.

There is an overcrowded tortoise pond in front of the temple grounds and feeding the animals is considered part of the merit-making, temple-going rituals.