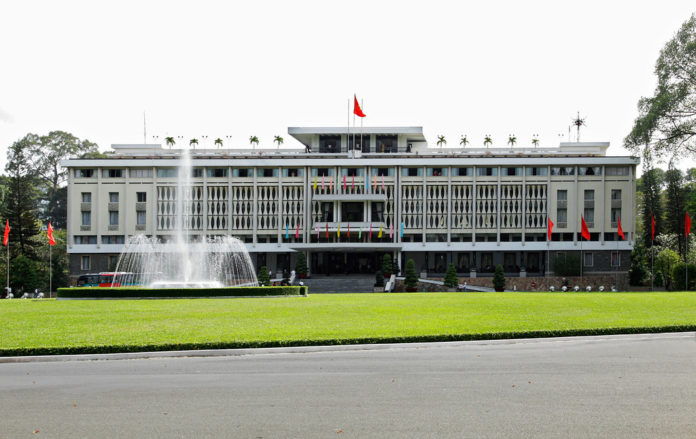 The iconic Reunification Palace made its name in global history when in 1975 a tank belonging to the North Vietnamese Army crashed through its main gate – thus signifying the end of the Vietnam War. This image is one of the most famous pictures depicting the Reunification Palace which has seen a rich and varied history and once served as the base of the US-backed Vietnamese General Ngo Dinh Diem during the Vietnam War, until his assassination in 1963.

The palace is like a time capsule frozen in 1975 with two of the original tanks used in the capture of the palace parked in the grounds. Originally the site of the Nordom Palace also known as the Governor’s Palace its first role was as a home and workplace for the then French Governor of Cochinchina. The Reunification Palace is a landmark not to be missed by any tourist visiting Ho Chi Minh City. Surrounded by lush tropical gardens, the palace hides secret rooms, antique furniture and a command bunker within its eerie corridors. The Reunification Palace is still in use to host occasions including APEC summits and national events of significant importance.

The Reunification Palace is a five-storey building with the basement housing a warren of tunnels, a war room and telecommunications centre. The war command room still has maps on its walls and period telecommunications equipment on display, whilst adjoining basement rooms feature war propaganda materials. Other areas of interest are the third floor featuring a card playing room, a fourth floor which once had a casino and was used for entertaining guests and a rooftop terrace with a heliport.

The Reunification Palace entered the world history books in 1975 when a Vietnamese Air Force pilot (who was also a communist spy) flew an aircraft over the palace with an attempt to bomb it. Although no real damage was caused this was a significant step towards the fall of Saigon and the ending of the Vietnamese War.

On 30th April in 1975 at 10:45 a North Vietnamese Army Tank rammed the main gates and entered the palace grounds before hanging its flag on the balcony to declare victory for the communist party and thus ending the Vietnam War. Meanwhile staff escaped from the rooftop minutes before the palace was overrun, known as Operation Frequent Wind this was part of history’s biggest ever helicopter evacuation and included the departure of General Thieu.

The Reunification Palace is open from 07:30-12:00 then 13:00-16:00. Tickets are purchased at the main gate and visitors will be checked for security reasons. Free guided tours are available in English, French, Japanese and Chinese (invaluable as there are not many signboards inside). The palace is situated on Man Ky Khoi Nghia Street close to the Ben Thanh Market with the main gate located on the east side of the palace gardens.
Opening Hours: Daily 08:00 – 11:00 & 13:00 – 16:00
Address: 135 Nam Ky Khoi Nghia, Ben Thanh, District 1, Ho Chi Minh City